ALIX PEARLSTEIN AT THE KITCHEN

A vintage Yves Saint laurent gold lamé blouse and a wild mink coat by J. Mendel make star appearances in Alix Pearlstein's bold, ambitious and strikingly successful video/installation After the Fall, now on view at The Kitchen. In the piece, which surrounds the viewer with projections on four sides, a cast of eight is divided into two "teams"--red and gold--suggesting opposing social groups. According to the artist (in an exclusive interview with me) the glittering metallic blouse "was the inception for developing a group identity that is flashy/trashy/glamorous/Hollywood-Vegas, in opposition to the other group that is utilitarian/sporty/abstract/bright--night and day: two different logics that are detailed and specific but can't be precisely identified in terms of time and place." The piece is absolutly mesmerizing: you are surrounded by moving figures on four sides--you move, they move, and the black box that you/they inhabit extends without limit in time and horizon. This major work is complemented by two smaller pendant pieces making this a spectacular presence in the Fall art scene. In Goldrush "a seemingly invaluable object - a white rectangular panel - is placed in the middle of a black box theater. A group of nine, each wearing an article of metallic gold clothing set upon the task of ripping it apart. They tear it to shreds, taunting, fighting and climbing all over each other to greedily gather every last shard of it for themselves." Two Women suggests a runway fashion show and, as with all the artist's work, is a hypnotic study of performance and relationship.
http://www.alixpearlstein.com/
http://www.thekitchen.org/ 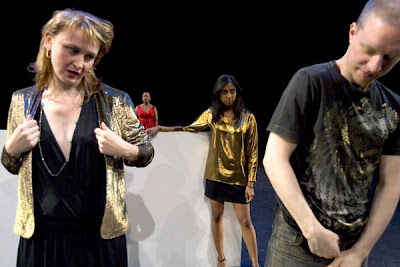 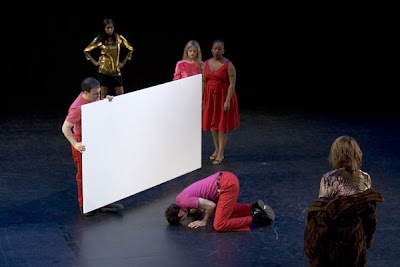 Posted by Alan_Rosenberg at 9:24 AM