Pietre Dure at the Metropolitan Museum

RUSH to the Metropolitan Museum as soon as possible to see "Art of the Royal Court: Treasures in Pietre Dure from the Palaces of Europe." Actually you have until September 21st to see this spectacular exhibition, but time flies and the next thing you know this once-in-our-lifetime assemblage will be dispersed. The show includes examples of hardstone carving and inlay from the early Renaissance to the neo-classical, from massive, wildly ornamented cabinets to exquisitely delicate and refined miniatures. Pietre dure craftsmanship has never dissapeared but the curators have, perhaps wisely, left out the mid- to late-nineteenth century when, as I wrote elsewhere about certain examples in the Gilbert Collection, technique exceeded taste. As much as I love all things nineteenth-century some of the pictorial hardstone inlays circa 1890 are pretty atrocious. Unfortunately it is that type of thing that turns off some people who, even more unfortunately, are inherently lacking in discernment . . . like James Gardner, an alleged art critic for the reactionary New York Sun newspaper who opened his review of the pietre dure exhibition with the statement that "there is nothing quite like those two little words, 'decorative arts,' to send all but the most committed museumgoers heading for the exit . . . any attempt to entice viewers with largely anonymous heirlooms from the ancien regime is probably a fool's errand. To date, the Metropolitan Museum has had only one notable popular success in this regard, the gorgeous two-part tapestry show that occupied its galleries this past autumn." I guess he didn't see the Herter Brothers exhibition and hasn't heard of the Wrightsman galleries, etc. Although his review is favorable he inexplicably calls the exhibition "oddly charming" as if it was a show of tiny, tacky bibelots rather than a collection of many of the greatest masterpieces of design and craftsmanship of all time and place.
The fabulous tabletops shown below depict allegories of air and water, made in 1761 in the Grand Ducal Workshops in Florence. Okay, so they are more elegant than imposing but, believe me, this show does not lack for imposing, authentic masterpieces. 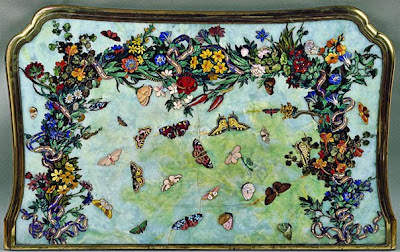 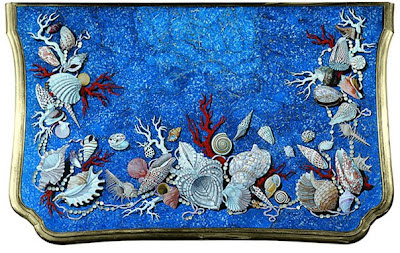 Posted by Alan_Rosenberg at 2:32 PM