My article on Earl Krentzin will be appearing in the March/April issue of Silver magazine. A preview is below, plus images of three pill boxes and two chests, all from 1970-71.

Much has been made in the design press of late about the blurring of boundaries between design and art. The New York Times recently declared that "design is the new art," suggesting that the decorative arts are just now getting the respect that painting has received for centuries. A recent article in Vogue Living noted that "design was once considered a shabby cousin to the art world and was kept at a disdainful distance, but now the two are becoming increasingly linked." Much of the buzz is about the affinity between the design and art of our time (meaning the last 15 minutes) and the embrace of 20th and 21st century design by collectors of contemporary art. But is it all really so new? Creators as diverse as ceramist/sculptor Peter Voulkos and painter/textile-designer Vera Neumann were obliterating the boundaries half a century ago. Earl Krentzin has been doing it with sterling silver since the mid-1950's. Krentzin's work defies the either/or categorization of art versus design and demands to be analyzed as both (although to defy and demand are not actions that one would associate with this humble and gracious artist). His functional-sculptural objects echo the relational forms and expressionistic surface of so-called "primitive" art but also carry on the tradition of virtuoso craftsmanship with precious materials conveyed in the exquisite objects of Cellini or Faberge. Krentzin's boxes, bowls, canisters and goblets are also sculptures, comprised of adorably grotesque humanoid or animalesque forms, single or grouped to tell odd little stories. The functional and material characteristics of his objects are traditionally attributed to crafts while their narrative quality is associated with the pictorial tradition of fine art. In 1968 Frank Getlein acknowledged the merging of these traditions in Krentzin's works by stating that they appeared "as if they were created by Peter Carl Faberge after designs by Hieronymous Bosch." 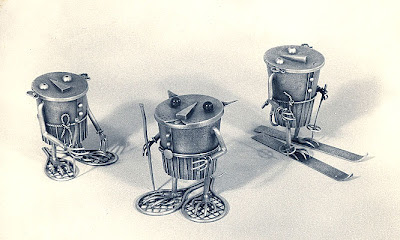 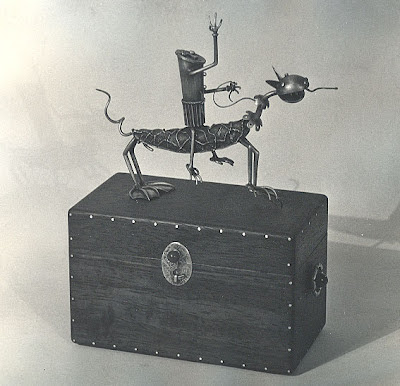 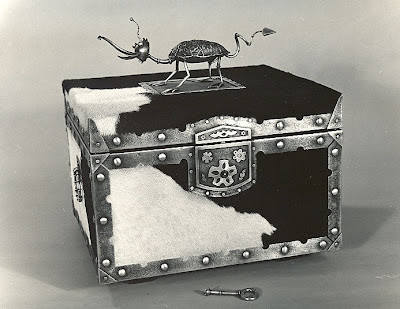 Posted by Alan_Rosenberg at 6:06 PM